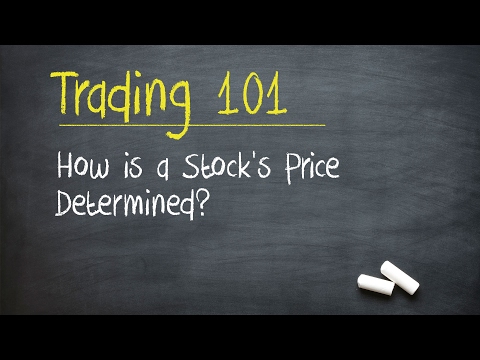 – Now I’ve done videos on how to make money from stocks, how a stock works, but never who exactly is determining the price of a stock, the value of the stock. Let’s take a look at that. Now before I get started I want to just give credit where credit’s due. I did not come up with this idea. Thanks to you as viewers, somebody left a question, and as obvious as it is to me, somebody that’s been in the market a long time, when I put myself in someone else’s shoes, oh, you know what? That makes good sense.

[cryptolock][/cryptolock]So let’s first just get to the comment that was made, and then we’re gonna tackle this right off the get go. Who determines the value of a stock? So yeah, how is this price being determined.   I promise I’ll try to boil it down to make it halfway entertaining. But at the end of the day, it’s all about this right here. And if you’ve ever taken an economics class, then you’ve heard of supply vs demand. And that is how a stock is being priced, how the value’s being determined. But let’s not look at is as supply and demand, let’s look at it in a much more practical way. And we’re gonna call supply, give. Right, if you want to give something to somebody, another way you could say that is, here, I’m gonna to supply you with this, meaning I want to give it to you. So supply associate with give. And then demand, is a want. I demand what? I demand you give this to me, right.

On the flip side what happens if there are a lot of people that want to give something? I don’t want that, I don’t want that, here, let me give it to you, let me give it to you. Everybody wants to give you something. Or in other words, everybody just wants to sell something. Get rid of it. Give, give, give. What is that gonna do to the price of something if everybody just wants to give it, sell it, get rid of it? Well if a lot of people want to get rid of something, give it, well prices are gonna go down, right.

And let’s apply this to the world of stock market. If a company, if you watched my past videos, you’ve heard me talk about pizza as an example. So let’s say a company specializes in pepperoni pizza. And I’ve used this before. And a study comes out that says pepperoni is the worst thing ever invented. If you eat it, for every bit of pepperoni, you’re gonna lose three years off your life.

And when a lot of people want to sell, that’s, prices are going down. On the flip side, if something comes out, pepperoni pizza adds three years to your life for every piece that you eat, what are people gonna want to do as far as companies that specialize in pepperoni? They’re gonna want. Hey, I want a part of that, I want those shares, I want to get involved.

You can watch the video that I did, entitled The Ultimate Game, and that kind of maps out the whole question, which revolves around supply and demand, and why you gotta be pretty witty, and why you gotta be pretty good at determining things because you’re always trying to figure out when is the want gonna overwhelm the give, when is the give gonna overwhelm the want. And that’s what trading is. We’ll put a link to that video down below. But that’s what’s gonna determine the value of a stock. The market itself, how many people want the stock, or how we people want to give it, how many people want to sell it. Or in other words, going back to supply to somebody else. I just don’t want that stock anymore. So hoping that answers your question and hopefully that just gives you a good idea of what exactly, and how exactly, a value of a stock is being determined. (whooshing).

8 Smart Ways to Save Money on Amazon Right Now