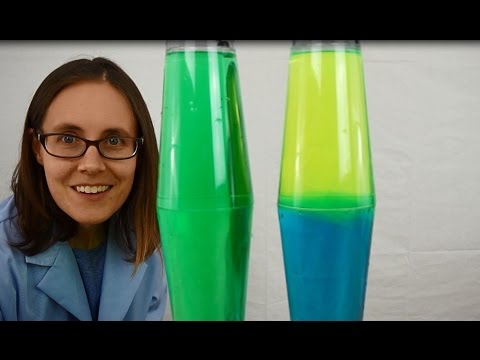 Water. There’s a lot of it on earth, and we use it every day. But don’t let that fool you into thinking that water is ordinary–because it’s not. Water is unusual and incredible! It has many surprising properties that we’re going to investigate in this series of videos. Our first investigation is called The gravity-defying lid. If I put a lid on a cup, and then turn them both upside down, what happens when I let go? The lid falls.

Of course it falls. Because of gravity, right? Now, what if I put a little water in the cup? I put the lid on top. I turn them both upside down. And this time, the lid stays. It defies gravity and it stays really well. I can even shake the cup! And the lid doesn’t fall off. In fact, it will stay on until I break the seal, which I can do by giving the lid just a little nudge. Like that. It’s a lot of fun. But dow does it work? To answer that, let’s look at a straw. You’ve probably seen the little trick where you can cap the end of a straw and lift water up? Like this? The water stays in the straw, until you let go with your thumb.

And then it falls back down. So how does this work? Because they’re very similar. Well, Right now, this straw is experiencing even pressure from all sides because of the air in the room. But, when I put it in water and place my thumb over the top, something changes. Do you see this line right here? The water was even with that line when it was inside the [cup]. But now that I’ve lifted it out the water’s dropped just a little bit lower. The amount of air in this top part of the straw did not change, but the space it occupies got a little bit bigger. And that changed the pressure here, which pulls the water up– keeping it in the straw. But that’s not the only thing going on. Cohesion is at play too! That means water molecules like to stick together. Cohesion. And so instead of just falling out, the water molecules stay together in the straw. Until I let go, of course. With a straw of this size, that trick works really well.

But do you think it will work with a bigger straw? Let’s find out. I put the straw in. I cap it with my thumb. And– It does NOT work! And notice how the water falls from the bottom up. Isn’t that cool? In this straw, the negative pressure up here, or the partial vacuum that we created, is enough to keep the water there for just a minute– –just a moment– But then, the cohesion of water is no longer strong enough to support that weight. Because the straw is bigger and there’s more water in it. So the water falls. Really cool, huh? Now, the same thing’s going on with our cup. So, whether we put in a little bit of water, or a lot, once we put the lid on top, we create a seal across the top of the cup. Just like my thumb did with the straw. And for the water to get out, air has to come in. But for this lid to move so that air can come in, Either the water has to expand, or the air has to expand just a little bit. And they don’t want to do that.

And so the lid stays on. Our next investigation is called the magic screen. Water passes through this screen easily. To prove it to you, I’ll fill this up with a little more water, by pouring it right in. And we already know from our gravity-defying lid investigation, that if I place a lid on this jar, and turn it over, the lid will stay. But what will happen when I remove the lid? Hm? Come on, lid. The water stays in the jar! Do you see that? Isn’t that cool! So what’s going on here? It’s the same thing as before, but this time instead of the lid being formed by a piece of cardboard, or plastic, it’s formed by the water itself. Cohesion, and surface tension allow the water and the screen together to form a lid on the bottom of the jar. If air can’t get in to take the place of the water, then the water’s not going to flow out. But they’re only just strong enough to keep the water in the jar.

And if I tip the jar, creating unequal pressure on one side— Then all the water comes out. This jar has a window screen on the top. But if you don’t have a window screen handy, you can use a nylon stocking. And it works just as well. In fact, the smaller the holes, the better this works. So with a nylon stocking I don’t even need to use a lid, I can just use my hand. Whoops! That was a little messier than I planned! But, anyway… The water’s staying in the jar. If I tip it slightly, some of it will come out. But then if I put it level with the ground again, It will go back to staying in the jar. Isn’t that fantastic? It’s kind of like–it seems like magic. Like you don’t expect it to work, but here it is! Science! And water’s remarkable cohesion.

Our last experiment for this video is called hot and cold water cups. These two cups are filled with blue cold water. And the water in these two cups is warm. I colored it with a yellow highlighter because I ran out of yellow food coloring. So that’s why it has a little bit of a neon glow to it. We’re going to explore what happens when we layer water of different temperatures on top of each other. So, I’m going to use a flat lid, (I just trimmed the edge off a plastic lid.) to do our first investigation: the gravity-defying lid. And I’m going to put the blue water on top of warm, and the warm water on top of blue [cold]. And if you’d like, You can pause the video and make a prediction. What do you think will happen with the different colors of water. Do you think the colors will mix? Or do you think they will stay the same? I very carefully press the lid to the cup, turn them both over, And of course when I let go, the lid stays, allowing me to carefully place it on top of the other cup.

Alright. Our cups are ready. Now let’s get a little closer view. And we’ll find out what happens when we remove the lids. Removing the lids is best done with two people. So I’m going to hold the cups steady, and, my assistant is going to slowly, carefully, (little slower) pull out the lid. And would you look at that! It mixes immediately. Because the blue water is colder–it’s more dense. And so it sinks, while the warm water rises. Now let’s try the other cups. Nice and slow. And this time, the water stays layered. The yellow water is less dense so it stays on top. And the blue water, which is heavier and more dense, stays on the bottom. Do you think that this second set of cups will stay yellow over blue? Or do you think it’ll turn green too? Pause the video if you want.

Make a prediction. And then, we’ll set up a timelapse and find out. Well that took a little while, didn’t it? It is now 10 hours after we started this experiment. And you can see that both of the cups did turn green. Eventually. But the one that was warm over cold? It took a while. And it happened with that really cool kind of stripey pattern going up through the middle. I love that. If you would like to learn more about cohesion, and water’s remarkable abilities, check out the linnks that I put in the description to some Amoeba Sister’s videos and SciShow videos. And Don’t forget to print out your book that goes with this video. You may be thinking, “That doesn’t look like a book.” But, there are instructions on the back for where to cut and how to fold. And once you fold it, it turns into your very own little pocket sized science coloring book with instructions for how to do each of these investigations that we did in this video. You can print it out in 8 1/2 x 11, 11 x 17 paper, or A3 or A4.

Speaking of books…. During our very long time lapse, I finished reading The Dark Talent by Brandon Sanderson. It is the [almost] final book in the Alcatraz vs. the Evil Librarians series. Which is a really fun Middle Grade book with a goofy sense of humor, magic sand, evil librarians… I enjoyed it a lot. If you’ve read something good recently, let me know in the comments. And don’t forget to check out Part 2, where we investigate surface tension. And if you would like to get one of these guides in your mailbox each month, check out my Patreon page. Alright, Be safe. Grow Smart. And I’ll see you next time.

And look at that! The water mixes almost immediately, The blue water is more dense and so it falls down. The yellow water is less dense, and so they mix to make green. Now let’s try the other cups. This time, they’re not mixing— –as much. I can even shake the cup, even shake the cup, And when I let go? It didn’t stay! These darn cups. The weight of the water is too much for gravity’s cohesion, Phhh! For gravity’s cohesion! Aaa!.