OLYMPIA, Wash. — A clearly frustrated Washington State Supreme court is trying to figure if the state Legislature actually complied with its order to fully fund education. It has been a decade since the lawsuit was filed, and justice are trying to figure out if they need to keep jurisdiction over the case to keep the pressure on the legislature.

The McCleary family for which the case was named has been fighting for 10 years now to get full funding for education. McCleary attorney Thomas Ahearne told the justice a hearing Tuesday, “The eyes of hundreds of thousands of high school kids in Washington today are on the nine of you.” Not just high school kids, but all public school children.

The McCleary Decision in 2012 ordered the state Legislature to fully fund kindergarten through 12th grade with lawmakers being held in contempt with a fine of $100,000 a day for the past two years.

The House and Senate passed a budget at the end of June that legislators say infuses $13 billion into education over the next several years. Their attorney Alan Copsey told the justices, “Full funding is enacted now.”

Supporters of the McCleary Decision dispute that claim. Ahearne said, “More money has been put into K-12 funding. But the court’s order and the constitution doesn’t require more funding, it requires ample funding.”

Outside court Vancouver high school teacher Adam Aguilera said, “They took levy dollars away from local communities, and they transferred it to a permanent state property tax. And so they just shuffled money around, and they did not provide ample funding for our children in our public schools.”

Frustration set in with the justices. “And it is frustrating because we get gross numbers and we get formulas and it’s hard to get handle on real numbers.,” Justice Debra Stephens said.

“I would say if you’re looking at the court the term ‘frustration’ is definitely there. We’re frustrated as well, said Kim Mead, president of the Washington Education Association, the teachers union. “We want to make sure we have an amply funded education.”

“I hope they’re frustrated,” said Stephanie McCleary. She shares that frustration, but she’s not giving up even though her own children are no longer school aged. McCleary said, “We’re still in it. They’re still in it. They still follow it. I wish they were here with me. This is a fight for all of the students of the state of Washington, not just my own kids anymore. And maybe my grandkids someday.”

No final decision from the Supreme Court just yet. The big question: Is the legislature now off the hook? Or will the justices continue to hold them in contempt?

“I believe we should be held in contempt,” said Rep. Gerry Pollet, D-Seattle, “Because we clearly as the state admitted did not fully fund education this year.” He would like to see a special session called in the next three months to deal with the capital budget which includes school construction.

The McCleary side would like to see lawmakers add more money to education when they meet again in January.

Those fines have now amounted to $80 million and growing. 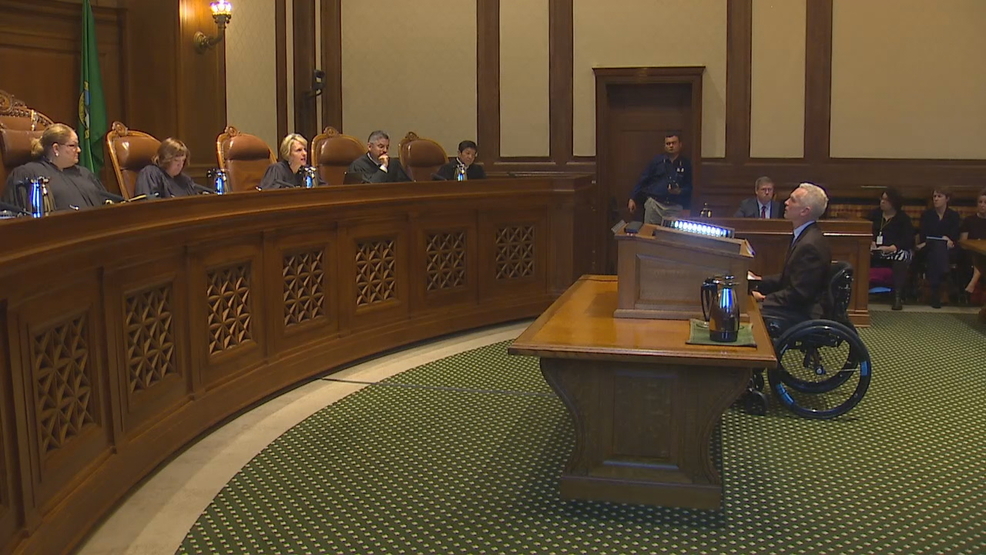 The Washington State Supreme Court took up a case Tuesday, Oct. 34, 2017, about whether the state is fully funding education. (Photo: KOMO News)

Sources of Hope for Education Technology in 2018

Which Countries Have The Best Education?