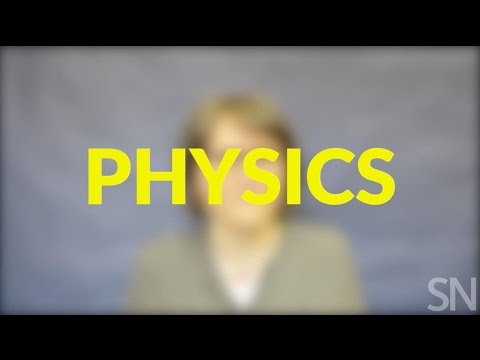 So the big discovery this past year was the detection of gravitational waves by the LIGO experiment. And we expect to see more from them in the coming year. So that’s really exciting. Everyone is super pumped about gravitational waves right now. We could see more black holes coalescing and creating waves that radiate out. The other thing LIGO might be able to detect is merging neutron stars. So when these merge, they create gravitational waves just like the merging black holes did. But one exciting thing about neutron stars is that when they merge, they might create light that we could see if we can locate where that collision happened and point telescopes at it. Well particle physics is sort of in a weird state right now. It’s a little bit of — people are certain get anxious because the Large Hadron Collider has found the Higgs Boson, but it hasn’t found anything else. And we know that there’s a lot of stuff that’s still unexplained in particle physics, like we don’t know what dark matter is — the stuff that makes up a large portion of the matter in the universe.

So scientists are starting to look in some more out-of-the-way corners for new physics. So one of these experiments is called the muon g-2 experiment. That’s going to start taking data in 2017. So in this experiment they look at muons, which are like heavy electrons. They send these muons through a magnet, and they look at the magnetic properties of the muon and try to understand those. The muon behaves like a little bar magnet, like it has a North and a South Pole. And that magnet, when it’s in the magnetic field, rotates around. It precesses, kind of like a top. So what the muon g-2 experiment is going to do is they’re going to measure the rate of that precession. That can tell you all kinds of things about physics that we might not know yet, we may not understand yet, because the rate of this precession depends on all these little particles that are blipping in and out of space kind of in the quantum vacuum all the time.

So if the number that we measure differs from the prediction, that means that there could be another particle out there that we aren’t aware of. Another new experiment kicking off in 2017 is something called the Cold Atom Laboratory. They’re taking a weird quantum state of matter called a Bose-Einstein condensate, and they’re sending it into space. So a Bose-Einstein condensate is state of matter that you get when you make atoms really, really, really cold. And they all sort of take on the same quantum state. So they all kind of behave as one, and it’s sort of like they all become one with The Borg.

Physicists treat these Bose-Einstein condensates like a playground, They do everything from studying the fundamental laws of physics to simulating the early universe or black holes. The reason they want to send this to space is because you have to get it really cold, and in space you can you can get it even colder. And you don’t have to worry about the effect of gravity pulling on your atoms because you’re in free fall at the International Space Station.

This will be the coldest place in the universe as far as we know..